Thank you to all of our Ethnic Studies Now Coalition members who responded to our text message to call the LAPD Chief's office to demand Dr. Melina Abdullah's immediate release. Dr. Abdullah, a key leader of the Ethnic Studies Now Coalition is also a leader in the Black Lives Matter LA movement. She was a part of the OccupyLAPD encampment at LAPD headquarters across from LA City Hall in Downtown Los Angeles. Today the LAPD decided to clear out the encampment and Dr. Abdullah and Sha Dixon were arrested while trying to simply deliver a letter to the LAPD. We sent a text blast to our network and many of you responded that you had called Chief Beck's office --Thank you! Black Lives Matter - LA confirmed via a tweet today at 4:30PM that both Dr. Abdullah and Sha Dixon have been released. BLACK LIVES MATTER! BROWN LIVES MATTER!

UPDATE: Both @ShaDixon & @DocMellyMel have been released. Stay tuned for next steps folks. This isn't going to stop us! #BlackLivesMatter 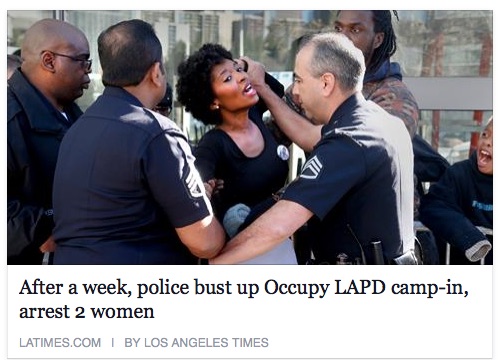