Thank you to the students, educators, community members and community organizations that made this happen!  This resolution will assist in having the high school curriculum mirror the student body in SCUSD.

Ethnic Studies Now in SCUSD! May 21, 2015 SCUSD Board Meeting

Ethnic Studies as a graduation requirement presented to the SCUSD Board May 21, 2015

WHEREAS, Sacramento, CA is the 2nd most ethnically diverse city in the United States; and

WHEREAS, Sacramento City Unified School District is the 4th most diverse school district in the United States; and

WHEREAS, our students are 37% Hispanic or Latino, 17.4% Asian, 18% African American, 19% White, and 5.3% of students are two or more ethnicities and over 44 languages are spoken in our district; and

WHEREAS, we need a high school curriculum that reflect the diversity of ALL students; and

WHEREAS, only 1 of 13 high schools within our district offers ethnic studies, even though over 80% of our school district populations are students of color; and

WHEREAS, the CA statewide initiative AB101, an initiative that mandates that an A-G ethnic studies be made available at all high schools  is in the appropriation stages in the California Department of Education; and

WHEREAS, the California Teacher’s Association (CTA) has publically declared their support for the AB101 ethnic studies initiative; and

WHEREAS, the goals of SEL (self-awareness, self-management, relationship skills, decision-making, and pro-social behaviors) could be supported through the implementation of an ethnic studies course; and

WHEREAS, close to 2500 signatures have been collected in support of this ethnic studies initiative from students, parents, teachers, and community members; and

WHEREAS, our objective is to have all students learn to respect, accept, and love themselves and others.

NOW, THEREFORE, BE IT RESOLVED that the Sacramento City Unified School District Board of Education construct, implement, and sustain an ethnic studies course as a high school graduation requirement.

RESOLVED FURTHER, that an ethnic studies course modeled after an A-G approved course be developed and proposed by November 2015 and accepted by April 2016.

RESOLVED FURTHER, prospective teachers for “Phase 1” will have comprehensive training, professional development, and certification options provided to them by the Sacramento State Ethnic Studies Teacher Training Credentialing Consortium by Spring 2016.

RESOLVED FURTHER, that a funding plan be developed through the LCAP to ensure that the course and tools for its evaluation will be funded comprehensively in a manner and level commensurate with this recognized community need as a local priority.

RESOLVED FURTHER, the ethnic studies curricula and teaching methods be evaluated on a semester to semester basis to make necessary improvements to ensure that its content be relevant, meaningful, and effective to properly address and support the recognized community need.

RESOLVED FINALLY, that a meeting for a call to action towards this initiative be declared by the Board of Education no later than the last board meeting of June 2015.

PASSED AND ADOPTED by the Sacramento City Unified School District Board of Education on this ___ day of _______, 20__, by the following vote:

President of the Board of Education

Secretary of the Board of Education

Speakers on Ethnic Studies at SCUSD Board Meeting

(SACRAMENTO, CA) - This Thursday, the Student Advisory Council in collaboration with the Ethnic Studies Now - Sacramento Coalition would like to invite the public to come support the resolution for an ethnic studies high school graduation requirement that will be presented by the students to the Sacramento City Unified School District (SCUSD) Board.

Sacramento is the second most ethnically diverse city in the country but it lacks a robust ethnic studies program in its public high schools. The Student Advisory Council will propose a resolution to establish a framework and timeline for the establishment of ethnic studies as a graduation requirement. The Student Advisory Council's resolution will help bring SCUSD in line with other school districts around the state (El Rancho, Los Angeles, San Francisco, Montebello and Woodland unified school districts) that recognize the importance of a culturally relevant curriculum and have taken steps to establish ethnic studies in their schools.

"We are told we are the future, I say we are the now! This is why we will be at the board meeting this Thursday." said Saraith Aispuro, Luther Burbank High School Senior. "I believe that an ethnic studies requirement will teach me, my classmates and younger generations my background and the entire story of this great melting pot country of ours."

The Ethnic Studies Now Sacramento Coalition is a coalition of students, parents, educators and community members that is led by a group of inspiring SCUSD high school students.

For media inquiries please contact, Dyane Osorio at 916-801-0483 or email her at [email protected]

For more information on the resolution or how you can support the students, please contact [email protected]. A petition to support an ethnic studies graduation requirement in SCUSD has garnered support from approximately 2500 individuals. The petition is available to view and sign online at www.ethnicstudiesnow.com/scusd or can be signed by texting SCUSD to (916) 623-4866.

Parents, students, educators, and community members are invited to attend a community meeting 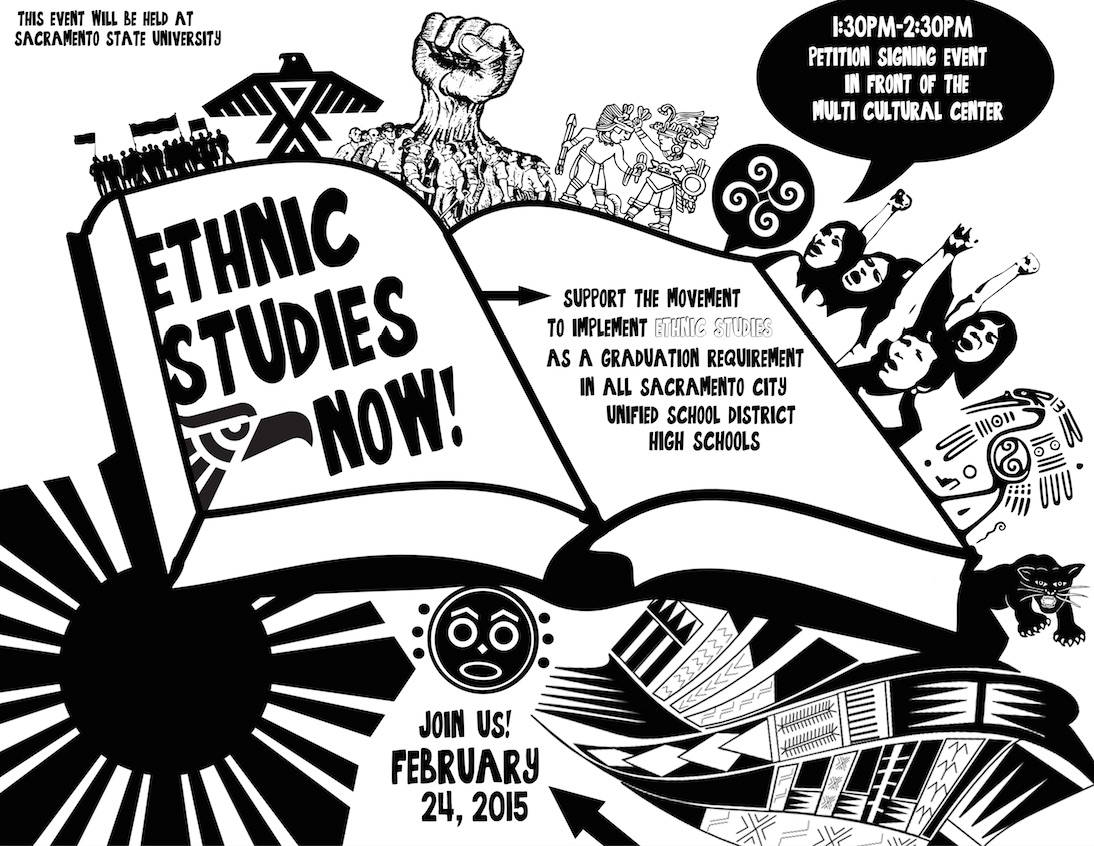